Get lovely emails every time Quinn's Quandries has a new post

Oklahoma to light up Mitchelstown stage 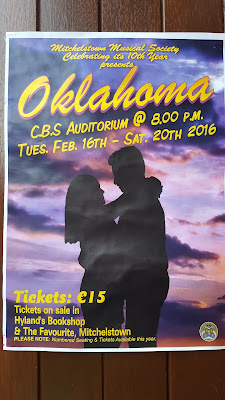 Excitement and anticipation are building in Mitchelstown, as the countdown to this year's musical by the Mitchelstown Musical Society begins in earnest. This year marks the society's tenth show and they are celebrating in style and flair with a production of Oklahoma from February 16-19.

The much loved musical and theatre classic is set in Oklahoma in 1906 and it follows the confusing, hilarious and endearing love tangle between a cowboy and farm girl and there is also a parallel romance between another cowboy and his flirty fiancee.

The show will see some familiar faces like Elaine Lee Murphy, Mike Breen, Paul Finn, Declan Herlihy and Siobhan Barry joined by newcomers to the society, Ali McCormack and Patrick Kirwan, all coming together on the stage of the CBS Secondary School in Mitchelstown for what the director described as a "true tribute to the original".

There are a lot of musical numbers, which people will recognise and will be able to sing along to, while there are great dance routines, which will get people bopping in their seats and the show is suitable for all the family.

With nearly forty people in the cast and many working behind the scenes, as well as a lot of support from local businesses, the show is a true reflection of community spirit, people working together and unyielding support for local artistic creativity and vision.

Mary O'Callaghan and Rachel Lawton are heading up the production team and everyone on the stage, behind the scenes and within the community are really looking forward to the curtain going up on February 16.

Tales of victory, tales of woe, stories weaved from friendships and threaded through love, new lives and the premise of new beginnings - Oklahoma in Mitchelstown is not to be missed.

To ensure that you don't miss it, Quinn's Quandries have four tickets (two pairs to be won) to give away for the opening night on February 16. See the Facebook page Sandra Quinn Avondhu to enter by liking and commenting, or comment here to be in with a chance to win. The competition is open until this weekend and final entries will be accepted until Saturday, February 13 - the winners of the two sets of tickets will be announced on Sunday. Best of luck!

Tickets are €15 and are available from The Favourite and Hyland's Book Shop in Mitchelstown, the show starts at 8pm and runs from February 16-19.
Posted by Quinn's Quill at 15:54 No comments:

Discover a hidden gem in the dusty blog archives